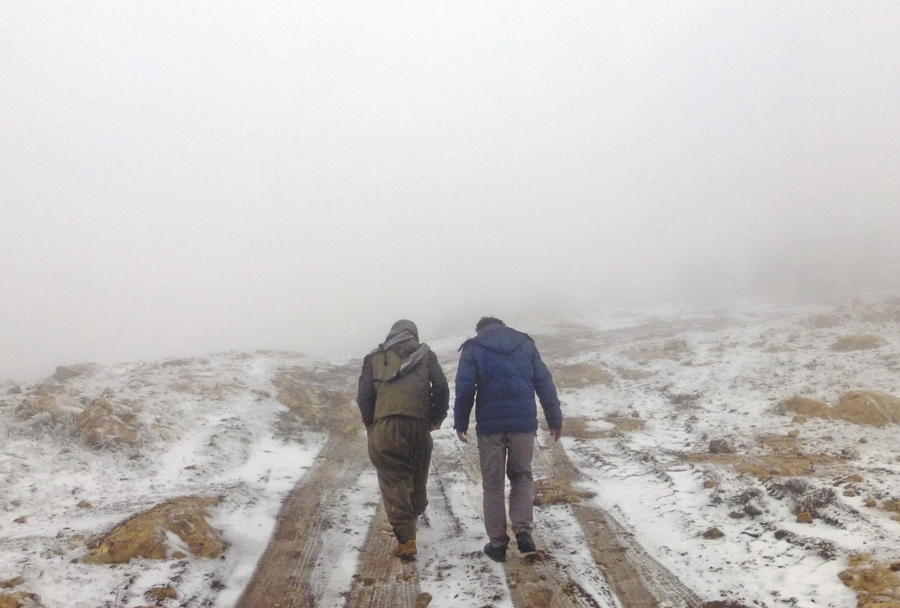 Yazidi refugees on Mount Sinjar: in the space of a week at the beginning of August, 40,000 fled up the mountain. | Credit: JAMES HARKIN/PROSPECT MAGAZINE

Like every other Yazidi living in the shadow of Mount Sinjar, Nada's catastrophe began on the 3rd of August last year. In just a few hours, Islamic State (IS) militants took control of the whole Sinjar area of northern Iraq. In the space of a week, more than 500 Yazidis were said to have been killed, and 40,000 had fled up the mountain, with the help of Kurdish fighters. After a series of United States airstrikes, President Barack Obama made a speech on 14th August declaring the siege of Sinjar over. The following day, the inhabitants of Nada's village of Kocho were given a final ultimatum by the men from IS.

“You have to change your religion,” the fighters told the people in the village. Even though they were terrified, the villagers refused. Some time later, the fighters came back and reassured the villagers that they would be treated like Christians; in IS's medieval interpretation of the Koran, Christians are permitted to pay a tax and abide by a series of arcane restrictions in return for protection. “Don't worry,” they said. “You can take your cars and come to a school near the village. You will be protected.”

It wasn't true. As would shortly become clear in their online magazine Dabiq, IS had already declared the Yazidis to be devil-worshippers — adherents of a creed “so deviant from the truth” that they would have to be converted to Islam or taken as slaves. Nada and other villagers were transferred to a school outside the village and informed that anyone who converted to Islam could return to live in Kocho. Once again, no one said yes. “We believe in God too. You have your religion and we have ours.” The villagers were made to empty their belongings into three bags, including all their gold, and were split into groups of males and females. The men and boys were taken away. Nada doesn't know where they went. The women were taken to an “institute” in a nearby village called Solakh. A few hours later they came back with the order that the women were to be divided into three groups: girls, women with children and older women or grandmothers. “They said the mothers should go to the second floor of the institute, with their children.”

Perhaps in deference to the IS's codes of propriety, many of the women wore headscarves to hide their faces, but they were told to remove them. “They wanted to see our faces to see nice girls to take to their friends,” she says. Her brother has two children and Nada, thinking that mothers might stand more of a chance of evading the attentions of their abductors, took one and said, “I'm married and this is my child.” It worked — the mothers got to stay at the institute. One night, however, “they came again and wanted to take girls or women.” One of the IS fighters didn't believe her story: “You are not married, why are you here?” But the child, only four years old, piped up and said: “This is my mother.” The fighter's suspicions were allayed. The next day, at midnight, they were taken to a nearby city, Tal Afar, an IS stronghold, where they stayed in a school for two weeks. “In every classroom there were 50 or 60 women,” Nada remembers. “The rooms were very small; we couldn't sleep.” The food was terrible too — just a small portion of poor quality cheese and bread, and for dinner one potato or an egg. Most of the IS fighters weren't wearing balaclavas so she could see their faces clearly. Nada didn't know them, but thinks they were local Arabs from Tal Afar. According to various sources, between 3,000 and 5,000 Yazidis are still missing, while the UN reports that as many as 1,500 may have been forced into sex slavery. Amnesty International, in a December report based on many interviews, cites “hundreds (possibly thousands) of Yazidi women who had been forcibly married, sold, or given as 'gifts' to IS fighters.” The Times has said this is “thought to be the biggest case of enslavement this century.”

Read the rest of the article in the April 2015 issue of Prospect magazine.

James Harkin is a journalist who covers social change and political conflict.