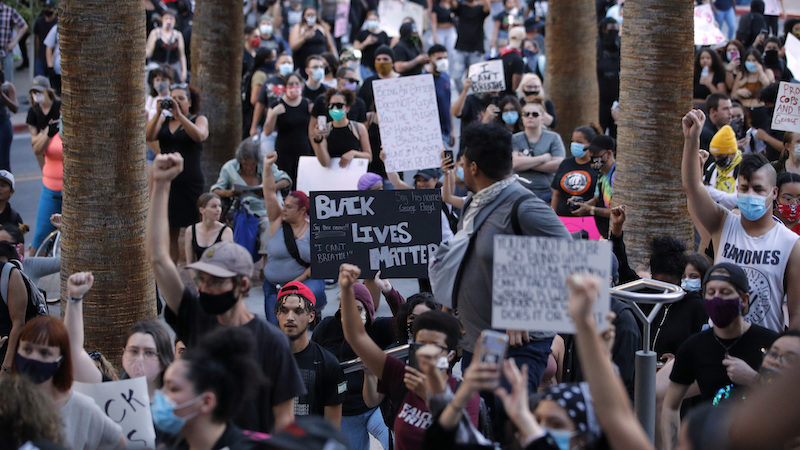 Protesters rally May 30, 2020, in Las Vegas, over the death of George Floyd. Image: AP Photo/John Locher

Last summer, millions of people across the U.S. took to the streets in the wake of the police murder of George Floyd in Minneapolis. These historic demonstrations sparked a national reckoning over policing, racial justice, and systemic inequities. We’re looking back at some of our investigations into the police and the criminal justice system published in the year since the uprisings began.

The Evidence Against Her

When Nikki Addimando shot her abusive boyfriend, she said she acted in self-defense. She had prolific evidence of years of physical and sexual abuse at his hands. But the prosecution convinced the jury she was a conniving killer. Reporter Justine van der Leun’s investigation, published in partnership with GEN, delves into how victims of domestic abuse are criminalized for acts of survival.

Fear, Illness and Death in ICE Detention: How a Protest Grew on the Inside

In this investigation, former Type Investigations reporting fellow Seth Freed Wessler covered the protest that erupted inside the Irwin County Detention Center in Georgia and raised the alarm about conditions at the facility during the pandemic. The protest that Wessler reported on grew into a larger demand to close down the center, which has been under federal investigation for complaints of abuses against immigrants. In May, Homeland Security Secretary Alejandro Mayorkas ordered ICE to sever its contracts with the facility.

Kenneth Clark lost custody of his children after being sent to prison for a failure to appear in court. In her investigation in partnership with The Nation, former Type Investigations fellow Sylvia A. Harvey chronicles the slowly unfolding nightmare of losing his kids — and why Clark’s loss was far from uncommon.

In 2014, Sheila Kimball spent 24 hours in jail for refusing to testify against her allegedly abusive husband. In a partnership with The Appeal, Jessica Pishko reports on the practice of arresting and jailing domestic violence survivors. Pishko reveals that dozens of counties have “no-drop” policies, which require every domestic violence charge to end in a trial or a plea deal. As the movement to defund police grows, advocates argue that the criminal justice system tends to fail domestic violence survivors, who are often cited as a reason to maintain the status quo.

What Will It Take for the Atlanta Police Department to Change the Way It Polices Itself?

When Atlanta police officer Garrett Rolfe shot and killed Rayshard Brooks during a DUI stop, critics demanded more oversight of the department and its use of force, echoing the national outcry over police brutality. But in an investigation with Atlanta magazine, reporter Sonam Vashi finds that similar demands have been made before and that promised reforms haven’t always panned out. As Vashi documents, some of the department’s accountability measures — including an “early warning” program for flagging problematic officers — are falling short.

Last June, as protests erupted around the country in the aftermath of George Floyd’s death, the journalism industry underwent a reckoning: How should we ethically and accurately report on protests, policing, and race?  Type Investigations Chief of Research Maha Ahmed convened a group of industry fact-checkers from outlets including The Nation, The Intercept, and Mother Jones for a roundtable discussion on how fact-checking can inform and improve reporting, particularly on policing and criminal justice.

Dozens of protesters who took part in the uprisings after George Floyd’s murder faced prolonged detention despite COVID-19 outbreaks, reported Type Investigations fellow Aaron Miguel Cantú in partnership with Reveal. His previous investigation, in partnership with The Intercept,  explored what experts described as an unprecedented use of federal power when U.S. prosecutors charged more than 100 people with felonies for crimes connected to civil unrest during the first week after George Floyd was killed.

The killing of George Floyd by a Minneapolis police officer in May 2020 was one among dozens of incidents where police failed to offer first aid after the use of force.  Investigative journalist and data editor Taylor Elizabeth Eldridge surveyed police departments in the country’s 50 largest cities to understand why officers often don’t provide aid. Thirty-seven departments said they provide first aid training, but only 20 said they offer refresher courses, and only 14 said they require them.

Bridging the Divide Between the Police and the Policed

Amid nationwide calls for police reform, this investigation takes a close look at the 73rd Precinct in Brownsville, Brooklyn, offering a lens on why reform so often fails. Journalist Saki Knafo, in partnership with the New Yorker, reports that in the early months of the pandemic, nearly half of all the arrests in Brooklyn were in the 73rd Precinct, where Craig Edelman was appointed commander in 2019.  Since then, police use of force rose in the precinct, and the Civilian Complaint Review Board received a hundred and forty-eight complaints, about a quarter more than the year before. In its lower ranks, New York City’s police force has begun to diversify, but white cops still account for three-quarters of the roughly 400 executives at the ranks of inspector and chief.

Type Investigations Ida B. Wells fellow Irene Romulo, in partnership with Cicero Independiente and Injustice Watch, reports that over seven years, high school administrators in the Chicago suburbs have asked more than 100 high schoolers to sign “gang behavior contracts,” a document that prohibits students from engaging in what could be considered gang-related behavior. Administrators warn students they can face escalating disciplinary measures for breaking the agreement. Romulo finds that the contracts often cite vague or seemingly subjective reasons for suspected gang affiliation. In one case, information about a student who signed a contract was shared with local police.